This is Quickly, my wife's very chill red-eared slider. She's had him about 10 years now... Longer than she and I have known each other. He's likely to live another 30. There's a story behind his name, but I'll leave that for her to tell.

When I met Quickly, he was living in a 20 gallon aquarium, and had outgrown it. When we moved in together, we upsized him to a 50 gallon tank. That seemed like plenty. But he kept growing, and we began to realize that he really didn't have enough space, the tank was difficult to keep clean (turtles are messy!) and he didn't have any stimulation. This became really apparent when we moved his tank out of the den during some renovations. He was right there with us as we'd eat dinner, and we started to plan a new tank.

We researched all sorts of tanks, and went so far as to purchase a 100 gallon black rubbermaid tank to build a habitat. But having him in with us during renovation really made us aware that he had a personality, and we wanted to see him. So we began looking at options for the largest glass tank we could fit into our den, and we'd knock a hole in the wall so we could see him. The largest tank we could fit was going to be 6 feet by 3 feet, and hold about 270 gallons. After pricing all that out for a while, realizing it would have to be a custom tank, we turned it down a notch. Gemma found a used 180 gallon tank (2 feet front to back instead of 3) in Astoria, I managed to wrangle that ~400 pound tank into the trusty minivan, and home I went. And then back again, to pick up the stand.

The stand was steel, and looked fine... At night. In light of day, as I was sanding and repainting, I realized that this was something some welder had tacked together. I needed this to handle more than 2000 pounds of glass and water, as well as not crack the slate flooring in the den, so I decided I'd have to build my own stand. I'll probably turn the steel one into a garage workbench or something.

I planned to drill the tank for overflows (I'm a reef guy at heart) and have a sump, so I needed to get that done first. I've drilled holes in tanks a few times before, but never something this big (or expensive). But the standard stuff about drilling glass applied, going slow, don't push, etc, etc. I have a right-angle Milwaukee drill that is about 200x overmatched for this job, so that was obviously the one I used!


Alright! Three holes, no cracks, things looking good! Previous owner had painted the back glass black, I removed that. You'll notice the leaves on the driveway, this is October of 2015. This project took a very long time, and I am very happy that it took its sweet time to snow that year! Since I wasn't liking the stand that I'd received along with this tank, I had to build my own. I was comfortable building a strong stand. The 240 gallon reef tank I built in 2011 is doing fine, the stand is rock solid, the engineermanship is sound. But that stand is hidden, built into a wall, and not finished in any sort of furniture-grade style. This one would need to be. Furthermore, we wanted the maximum amount of swimming area for Quickly, so his basking area would be above the main tank.

So the plan I came up with was a standard 2x4 construction stand, just like the one I'd built before, but this time wrapped with a craftsman-style veneer. The back would be open. The glass above the main tank is 11 inches high, and there to keep Quickly from climbing out and cracking himself into pieces on the stone floor. His basking platform would be on the right hand third of the tank.

The previous owner of the tank had included the terrible metal stand, which takes up space in my driveway even as I type this, but he'd also given me a 4 foot LED lighting fixture. Not enough to grow plants, but enough to light the tank not under the basking platform. Basically, perfect for a turtle tank.

Again, thanks Mother Nature for not snowing me in and preventing this build!

If you follow along closely later on, you'll notice that the original design had the doors coming together with a very narrow separator. The entire front was going to be openable, no supports. I second-guessed this later in the process and added a middle support. Very likely not needed, but I'm not disappointed with the final result, and it is definitely not going to sag. So the doors have a 3" margin between them. 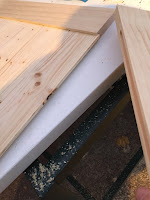 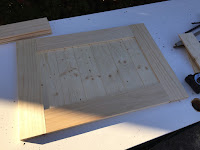 The doors are glued and pocket-screwed together, with the center panel dadoed to accept some pine paneling pieces. I really like how these came out.

The tricky part was cutting the plywood that I planned to use on the front of the cabinet to accept these panels. I initially tried using a thin-kerf circular saw, but found that the blade wandered enough to absolutely wreck the cut out, and I had to start over. Similar variances happened when I tested using a jigsaw and a regular kerf saw. Starting fresh, I ended up creating a jig and then using a router with a bearing to follow the jig and cut the opening PERFECTLY. Should have done it that way to start.

The top of the stand was a challenge, more for sourcing the correct materials than for any complicated cutting. I wanted it to be at least 1.5" thick and solid wood. I ended up getting several .75" boards and gluing them up.

That almost immediately failed, as the boards began to dry out unevenly and cupped up like crazy. Then I weighted the top down with buckets of water overnight to straighten the top out, one bucket leaked, dissolved the glue, and the piece came apart. That was... Frustrating.

So back to the hardware store I went, and purchased a flat, solid wood door. The door was about 18" too long, so I sliced it down. Turns out 'solid wood' is one of those marketing terms. Yes, what was inside that door is technically wood, in the same sense that a hotdog is technically beef. It was a very chippy, sawdusty mess! So I then had to cut it down more and attach a 'real wood' end and back piece. Wouldn't matter for looks, as it was being painted, but it sure did put me in a bad mood, as I was probably about $400 into wood just for the stand top, and it was taking weeks to get it ready. But then, just like that, it was done!

OK, not exactly done, but it sure looks like a stand now, don't you think? Since this was getting painted, I just screwed straight through the plywood into the 2x4 frame. The 2x4s carry the load, and the plywood prevents them from racking sideways under load. The screws would be covered over. The strap hinges are great, I love them.

Finally, on December 21, 2015, I got the tank stand into the house with its first coat of paint. This about two and a half months after Gemma first found the tank, so this project is not proceeding quickly (pardon the pun), but it's moving. Next step, shore up the floor. The last thing we want is this tank to land up next to the saltwater tank in the basement. 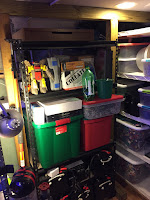 All told, the tank plus stand plus water plus rocks plus sump plus whatever was going to approach 3000 pounds. I knew the direction of the
joists, their span, etc. The tank is only a few feet from a foundation wall. It's unlikely that there would be a problem even if I did nothing. BUT, it's perched on a stone floor, and even a little flex is likely to crack the slate. So I added a 4x4 reinforcement to the basement below the tank. It's belt and suspenders.

It took until January 10 before it was finally time to wrassle the tank into the house. No white Christmas this year, no snow to speak of. Last year the tank would have been under a foot of ice and snow, but not this time. I'd managed to find my suction-based lifting handles, so the wrangling wasn't nearly as bad as getting the thing into and out of the minivan. But finally, the tank was in the house, no more worries about the weather, and phase two could commence!