When I saw a review of the X-Arcade joystick in an issue of CPU Magazine in the middle of 2002, I knew I had to have one, and that I needed to build an arcade cabinet around it... That's the only sane thing to do!

I've been collecting power tools piece-by-piece for a while now, a router here, a circular saw there, but I hadn't had any project to actually use them all on! They were way too clean, too unused, and I'm sure very lonely. So I knew this was going to be a fun project. To start off, I assembled a material list: 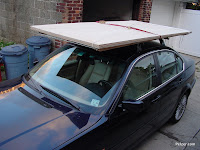 The first thing I had to do was get the plywood to my house... Not as simple as you might think, since I don't have access to a truck. I ended up making a rig that could hook to my Thule rack on Tabitha (my 4-door), and I must say it worked pretty well. I wouldn't recommend going faster than about 30mph though! 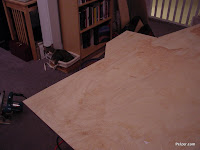 I began work in the middle of my main living room... Why you ask? The most reasonable explanation I can come up with is that I was dropped on my head when only a baby. I am STILL cleaning up the dust from this little adventure, 6 months afterwards. Next time, I'll build it in the garage, even though there's no heat.

I had worked out the design I wanted in AutoCAD. There are lots of designs out on the web, but a lot of them are missing critical dimensions. I'm pretty happy with the dimensions on my cabinet, so if you want the original files in DXF format, here they are:
Main Cabinet and MAME Marquee 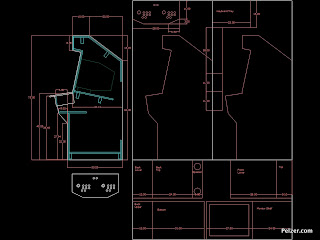 Construction went pretty smoothly... I laid out the first cabinet side on a sheet of plywood and cut within the lines. Then I laid that piece on another piece of plywood to trace the outline. I'm lazy. I then routed all the edges using a quarter-round bit. Six 2 foot lengths of 2x4 later, I had the basic cabinet together. As I mentioned earlier, I was planning to paint the cabinet when I was done, so I drilled through the sides of the cabinet in several places. Next time, I'd find a better way of doing things. But you can barely see the patch holes, unless of course I turn the lights in the room on. Hmmph.

If you're wondering about the metal marquee, I had a friend cut that from a sheet of stainless steel (I have two extras, if anyone's interested). Then in the space behind it, I hot-melt glued each light from a string of chase lights. It ended up looking really cool, and didn't cost much at all. It basically fades slowly from one color to the next. Very neat.

After everything was together, I decided that I really liked the raw wood look, and also that a big black or white box wouldn't go well at all with my apartment. So I grabbed an orbital sander and went to work. Many hours (and tons of dust) later, I got a can of polyurethane and proceeded to kill quite of my brain cells few. Bad stuff. But fun for the whole family! 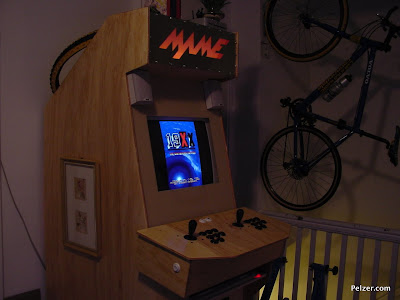